Publishing the Works of Robert Anton Wilson and Other Adventurous Thinkers 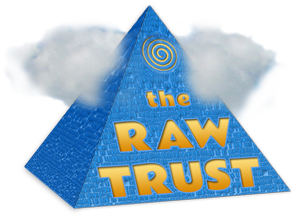 fly your lasagna over to the RAW Trust

We are all giants, raised by pygmies, who have
learned to walk with a perpetual mental crouch.
Unleashing our full stature - our total brain power
- is what this book is all about.

The current rampages of territorial-emotional pugnacity sweeping
this planet are not just another civilization falling, Vico fashion.
They are the birth-pangs of a cosmic Prometheus rising out of
the long nightmare of domesticated primate history.

My own opinion is that belief is the death of intelligence.
As soon as one believes a doctrine of any sort, or assumes certitude,
one stops thinking about that aspect of existence. The more certitude
one assumes, the less there is left to think about, and a person sure
of everything would never have any need to think about anything
and might be considered clinically dead under current medical standards,
where absence of brain activity is taken to mean that life has ended.
Robert Anton Wilson, Cosmic Trigger I

...an optimistic mind-set finds dozens of possible solutions
for every problem that the pessimist regards as incurable.

The dynamism of evolution, we repeat,
is the selection of information, coherence,
out of a random series of events.

The only sensible goal, then, is to try to build a reality-tunnel
for next week that is bigger, funnier, sexier, more optimistic
and generally less boring than any previous reality-tunnel.

Adequate communication flows freely between equals.
Communication between non-equals is warped and distorted
by second-circuit Domination and Submission rituals
perpetuating communication jam and a Game Without End.

It's important to abolish the unconscious dogmatism
that makes people think their way of looking at reality
is the only sane way of viewing the world.

I'm some kind of antibody in the New Age movement.
My function is to raise the possibility, hey, you know,
some of this stuff might be bullshit.

You should view the world as a conspiracy run by
a very closely-knit group of nearly omnipotent people,
and you should think of those people
as yourself and your friends.