How can we see animals in terms of the Eight Circuits Model of Consciousness?

Some thoughts from Rasa

Thanks to Yodhe Edwards for getting me to think about this.
I suppose I have previously been too chauvinistic to give this much thought.

Click here to visit a Wikipedia page for a
quick overview of the model. 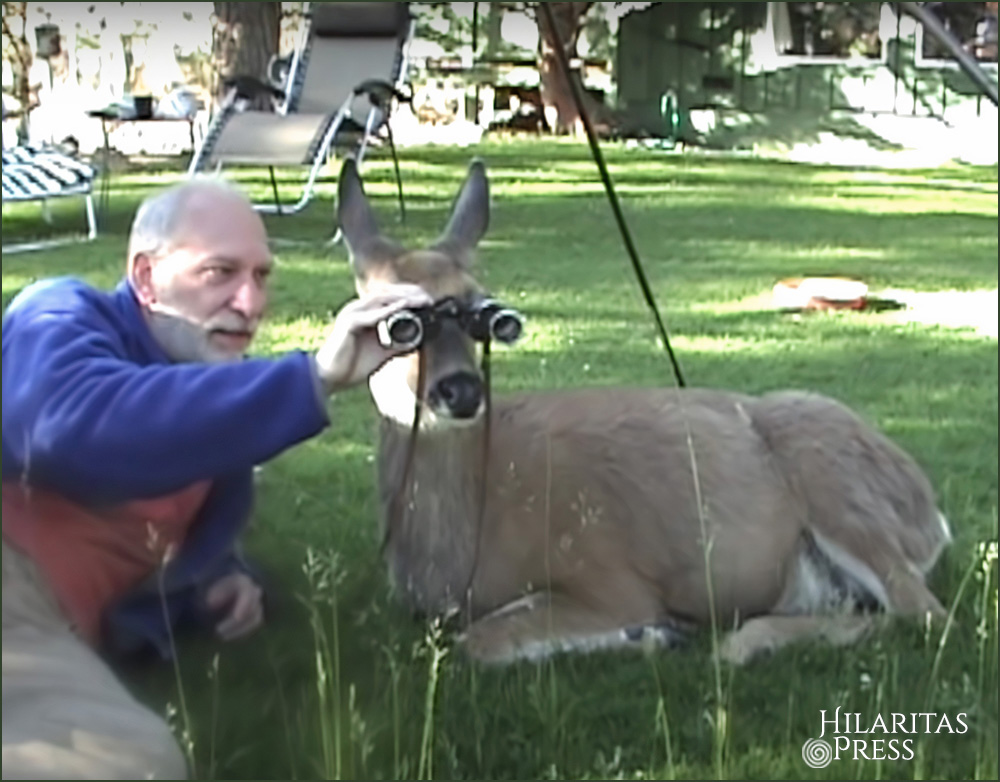 Rasa with his deer friend Eva

Circuits 1 and 2 seem easy to recognize in most mammals. Circuit 3 may have to be slightly redefined to include the kinds of logic and symbolic thought animals develop to navigate in their world. For us, the deer offer a great opportunity to see how individuals differ. We’ve gotten to know the deer in our local herd as individuals, and they do all act differently from one another in a wide variety of ways. Most of that seems like Circuits 1 & 2 responses, but if you think of the objects in their experience as holding some symbolic meaning, then yes, they seem to understand the symbolic meanings. Because I often have almonds in my pocket, and I don’t mind sometimes sharing a couple with a deer friend, as soon as I put my hand in my pocket, the older smarter deer immediately know what might happen. There is some kind of logical deduction going on there. When I first moved into my new house here, I found that one time a deer had defecated in the back yard. I scooped up the shit and went from deer to deer, holding out the scoop for them to smell. They are curious, so most of them came up to smell what I was holding. When they got a whiff and heard my forceful “don’t do that!,” they all got the message. No deer has shit in the yard since then. They can be hanging out in the yard and when they get the urge, they will walk out into the nearby woods, shit, and then come back. I’m always amazed to see my instructions were heeded.

Circuit 4, social/sexual behavior, seems easy to identify. The deer are very social creatures. They have a hierarchy within the herd, and yet that hierarchy evolves as members age and exert their dominance or not. It is interesting to see that when there are a lot of fawns running around, the does often don’t know if an approaching fawn is theirs or not unless they first smell the little guy’s butt. Another mother’s fawn will be forcefully pushed away. And yet, on the rare occasion when a doe dies and leaves young fawns orphaned, very often the matriarch of the herd will adopt the orphaned fawns. While mating is carried out instinctively at one time every year, the bucks have to work hard to get a doe to be a willing participant. There is a LOT of running around as the bucks chase after and entice a willing doe.

As for the higher circuits, that has to be much harder to figure out, if indeed there is any correlation. As far as some Circuit 5 indication, over the last 20 years we’ve been hanging out with the same herd of deer, we have had two very intelligent deer enjoy getting stoned with us. Normally deer get freaked out with the smell of smoke. That is maybe an instinctive reaction to forest fires, but those two clever deer who just liked to be near us often figured out that breathing in our smokey exhalation was a pleasant experience. We know that a lot of animals in the wild are attracted to fermented fruit. I suppose you could say that enjoyment of feeling high indicates some neurosomatic experience of multi-dimensional space more expansive than lower Circuit experiences offer.

As for the neuro-electric Circuit, mind becoming aware of itself independent of the patterns imprinted by the previous five circuits – that is perhaps difficult to ascertain. For evidence of that, we may want to look at Lily’s work with dolphins.

The neuro-genetic Circuit may be developed in some animals in a way that seems so foreign to our understanding that we don’t recognize it as such. That is certainly just a guess.

Circuit 8 – even Tim and Bob were not certain of the parameters of an experience with this Circuit. It could be that animals are simply not evolved enough to go so far beyond their more primitive programming, or, conversely, perhaps their lack of the more typical human restraints of ego identification allow them to always have a direct awareness of the unified field of all existence. Are they aware of that if that is true? I’m not even sure how one might observe or measure that.

A Search for Weirdness – Andrew Bishop’s Introduction to V. Vale’s...