Author of some 35 books including Cosmic Trigger, Prometheus Rising, Schrodinger’s Cat Trilogy, and co-author of the Illuminatus! Trilogy, Robert Anton Wilson (RAW or Bob) was a futurist, author, lecturer, stand-up comic, guerrilla ontologist, psychedelic magician, outer head of the Illuminati, quantum psychologist, Taoist sage, Discordian Pope, Struthian politician… maybe. Bob described his work as an “attempt to break down conditioned associations, to look at the world in a new way, with different perspectives recognized as models or maps, and no one model elevated to the truth”. His goal being “to try to get people into a state of generalized agnosticism, not agnosticism about God alone but agnosticism about everything.” His “Maybe Logic” inspired the creation of the Maybe Logic Academy. Google “Robert Anton Wilson” for mosbunall info. 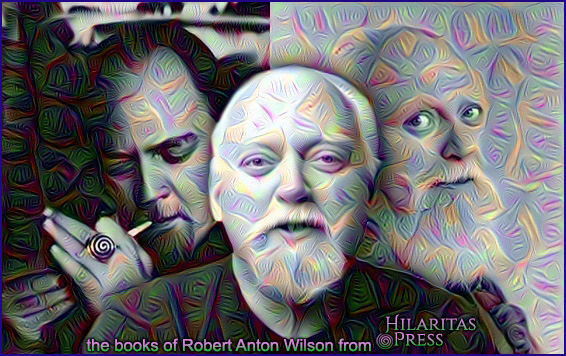 The Berkeley mob once called Leary and me “the counter-culture of the counter-culture.” I’m some kind of antibody in the New Age movement. My function is to raise the possibility, “Hey, you know, some of this stuff might be bullshit.”