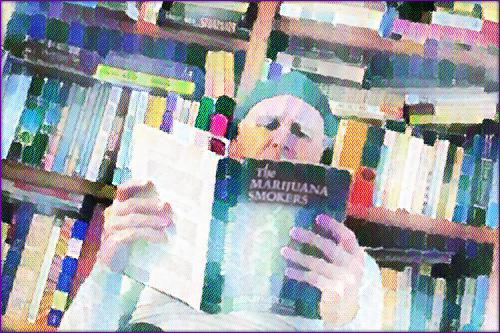 I was always attracted to writers who had encyclopedic minds and who seemed to know “everything” and especially those who wrote both fiction and non-fiction. I had gone on about a six-year bender with Aldous Huxley, and he was easily my favorite writer, and I still love him dearly. I was reading voraciously – including re-re-re-reading Aldous – when one night my wife and I went out to dinner, then browsed a local bookstore. I happened upon Right Where You Are Sitting Now and was immediately attracted to the form of the book and this Wilson dude’s varied interests, experiments, and tones. Then I noticed he wrote novels too, and in RWYASN there was a fiction piece, along with cut-ups – the book was dedicated to Burroughs and Philip K Dick – and I loved both of those guys too. But I confess I’d never even heard of RAW at the time. This was shortly before everyone got on Internet.

I bought the book and stayed up all night reading it. He did wild things to my nervous system and the book acted like a mild psychedelic for me. I went to work the next day on little sleep, came home and began re-reading RWYASN. Very soon after I bought and read every book I could find by him. Then I began re-re-reading and studying him closely, like I’d done with Huxley. No other writer has had such a profound effect on me as RAW has, and his writing has definitely created mental environments in which epigenetic effects have changed how my genes express themselves, which is all I could ask for in a writer.