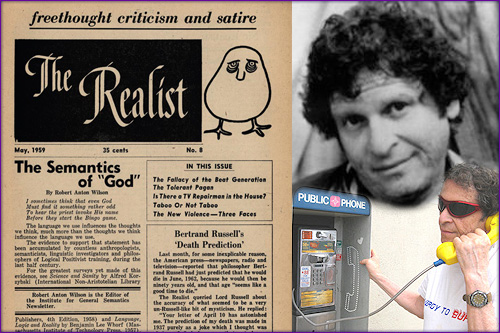 Bob Wilson and I originally became friends in 1959, when his first published article graced the cover of my irreverent magazine, The Realist. It was titled “The Semantics of God,” in which he suggested that “The Believer had better face himself and ask squarely: Do I literally believe that ‘God’ has a penis? If the answer is no, then it seems only logical to drop the ridiculous practice of referring to ‘God’ as ‘he.’” Incidentally, Bob’s byline in that piece was the first time he used Anton as if it was his middle name. He then began writing a regular column, “Negative Thinking.” – from Keep the Lasagna Flying at Amor et Hilaritas