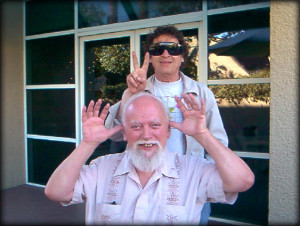 Since the late 1950’s when Robert Anton Wilson first wrote for Paul Krassner’s uncompromising satirical journal The Realist, the two were close friends. I asked Paul if he might write something for the launch of Hilaritas Press, and after a few attempts and emails back and forth, Paul decided he wanted to rework the piece he wrote in honor of Bob in 2007. After editing and adding some new paragraphs he sent us this wonderful and enlightening new version. – Rasa

Filmmaker Luis Bunuel once said that he made movies to give himself something to do between birth and death. So, then, welcome to the birth of Hilaritas Press to spread the word of genius Robert Anton Wilson. He died on January 11, 2007 at the age of 74. The prolific author and countercultural icon had been suffering from post-polio syndrome. Caregivers at his bedside read aloud all of his late wife Arlen’s poetry, and e-mailed to me that “He was quite cheered up by the time we left. He definitely needed to die. His body was turning on him in ways that would not allow him to rest.”

In his final blog on January 6, Wilson wrote: “I don’t see how to take death seriously. I look forward without dogmatic optimism, but without dread. I love you all and I deeply implore you to keep the lasagna flying.” Actually, it was expected that he would die seven months earlier. On June 19, 2006, he sent this haiku (with one syllable missing) to his electronic cabal:

Well what do you know?
Another day has passed
and I’m still not not.

Bob Wilson and I originally became friends in 1959, when his first published article graced the cover of my irreverent magazine, The Realist. It was titled “The Semantics of God,” in which he suggested that “The Believer had better face himself and ask squarely: Do I literally believe that ‘God’ has a penis? If the answer is no, then it seems only logical to drop the ridiculous practice of referring to ‘God’ as ‘he.’” Incidentally, Bob’s byline in that piece was the first time he used Anton as if it was his middle name. He then began writing a regular column, “Negative Thinking.”

Wilson took that notion as his personal marching orders, altering the consciousness of countless grateful readers of his 35 books — from Sex, Drugs & Magick to Everything Is Under Control: An Encyclopedia of Conspiracy Theories — all written with the aid of that good old creative fuel, marijuana. He once told me about his creative process: “It’s rather obsessive-compulsive, I think. I write the first draft straight, then rewrite stoned, then rewrite straight again, then rewrite stoned again, and so on, until I’m absolutely delighted with every sentence, or irate editors start reminding me about deadlines — whichever comes first.”

Bob originally became a dedicated pot-head in 1955. But, a few years before his death, he told the audience at a Prophets Conference, “I haven’t smoked pot in about twelve . . . hours, and I want you to know it’s great to be clean.” He enjoyed peppering his presentations at such distinguished New Age events with “motherfuckers” and “cocksuckers,” and was disinvited from participating in future Prophet Conferences because, said the organizers, “What we feel to be important to your insights are being lost to the audience when packaged in hard and harsh language.”

Wilson once described his writings as “intellectual comedy.” He told an Internet database, Contemporary Authors: “If my books do what I intend, they should leave the reader feeling that the universe is capable of doing something totally shocking and unexpected in the next five minutes. I am trying to show that life without certainty can be exhilarating, liberating, a great adventure.” He called his philosophy “Maybe Logic,” which became the title of a documentary about him.

Stephen Gaskin, founder of The Farm commune, wrote, “I had the good fortune to visit with Robert at his house and meet his wife. When I saw the beautiful relationship between them, I understood why the sex scenes in his books are so nicely written that they stand out above everyone else’s sex scenes that I’ve read.

“One of my next encounters with him was standing on the sidewalk of a cold November day in Amsterdam waiting for a taxi. He didn’t have enough of a coat, and he was standing in the cold with his collar turned up and his hands stuck in his pockets. It was a while after his wife had died and he looked quite forlorn. We collected him up, put a warm coat on him, and put a joint in his mouth. It was a real hoot to get to be friends with one of my very favorite writers. His Illuminatus! trilogy is a benchmark in science-fiction and contemporary paranoia.”

Wilson wrote his own obituary in an autobiography, Cosmic Trigger: “According to reliable sources, I died on February 22, 1994 — George Washington’s birthday. I felt nothing special or shocking at the time, and believed that I still sat at my word processor working on a novel called Bride of Illuminatus.

“At lunch-time, however, when I checked my voice mail, I found that Tim Leary and a dozen friends had already called to ask to speak to me, or — if they still believed in Reliable Sources — to offer support and condolences to my grieving family. I quickly gathered that the news of my tragic end had appeared on the Internet: ‘Noted science-fiction author Robert Anton Wilson was found dead in his home yesterday, apparently the victim of a heart attack. [He] was noted for his libertarian viewpoints, love of technology and off the wall humor. Mr. Wilson is survived by his wife and two children.’”

R. U. Sirius, co-author of Counterculture Through the Ages, writes, “Robert Anton Wilson enjoyed his first death so much, he decided to try it again. As the result of medical expenses and problems with the IRS, he found himself in a financial squeeze towards the end of his life. Word went out and the Internet community responded by sending him $68,000 within the first couple of days. This allowed him to die with the comfort, grace and dignity that he deserved.

“He taught us all that ‘the universe contains a maybe.’ So maybe there is an afterlife, and maybe Bob’s consciousness is hovering around all of us who were touched by his words and his presence all these years. And if that’s the case, I’m sure he’d like to see you do something strange and irreverent — and yet beautiful — in his honor.”

In 1974, I stopped publishing The Realist because I ran out of money and taboos. In 1985, I re-launched it in a newsletter format. For a feature story in the born-again Realist, I contacted Bob Wilson. There was a one-inch news item about a convention in Italy of the Married Roman Catholic Priests Association, representing 70,000 priests who had married in defiance of the Vatican. I gave the clipping to him.

“Bob, should you choose to accept this assignment, I’d like you to cover this event as though you had actually been there.”

Wilson wrote his report, and even I almost believed that he had actually gone to the married priests convention. Next, there was a tiny news item about the first International Orgasm Conference, and I assigned him to cover that event too, as though he had actually been there. The Realist was back in apocryphal business. This time I published the final issue in 2001. But Robert Anton Wilson is still alive in the form of his literary legacy. May he rest in lasagna.

Paul Krassner is the author of Confessions of a Raving, Unconfined Nut: Misadventures in the Counterculture