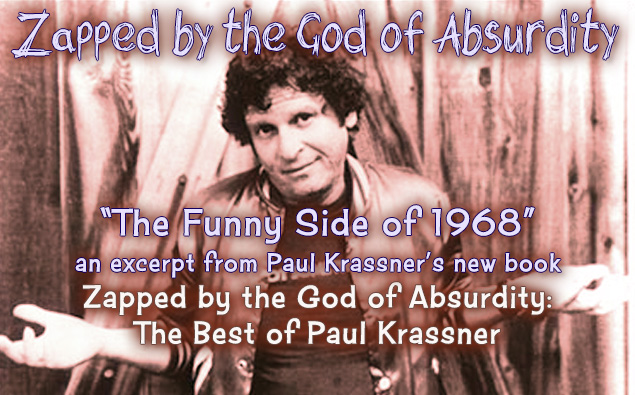 Paul gave us permission to publish this excerpt from his forthcoming book, Zapped by the God of Absurdity: The Best of Paul Krassner, to be published in 2019 by Fantgraphics with an introduction by Andy Borowitz. We haven’t seen the book yet. The graphics and photographs here were added by us for this post.

*The current FBI has swung a pendulum from 50 years ago, when the FBI was an enemy of progressive activists. An agent’s poison-pen memo attempted to smear Tom Hayden with the worst possible label they could invoke with flyers – yep, an FBI informer. Others distributed a caricature depicting Black Panther leader Huey Newton “as a homosexual,” and ran a fake “ 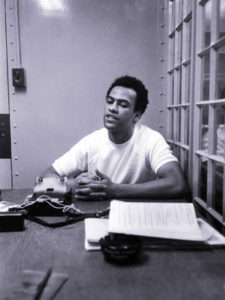 Pick the Fag” contest, referring to Dave McReynolds as “Chief White Fag of the lily-white War Resisters League” and “the usual Queer Cats – like Sweet Dave Dellinger and Fruity Rennie Davis.” I was described as “a raving, unconfined nut.” I thanked the FBI for that title of my autobiography.

*Folksinger Phil Ochs observed, “A demonstration should turn you on, not turn you off.” It was the credo of the Yippies (Youth International Party). 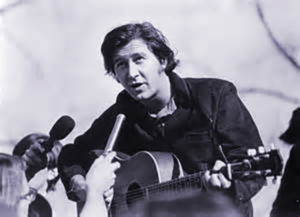 We were in Chicago at the Democrats convention, where a certain competitiveness developed between Yippie leaders Abbie Hoffman and Jerry Rubin. Abbie bought a pig as a presidential candidate, but Jerry thought Abbie’s pig wasn’t big enough, mean enough, or ugly enough, so Jerry went out and bought a bigger, meaner, uglier pig, which was released outside City Hall. In the elevator inside, a few cops were chanting, “Oink. Oink.” On a quiz show a contestant didn’t know the name of that pig. However, a book, Surveillance Valley, states: “The generals wanted to be consumers of the latest hot information. During the Chicago riots of 1968, the army had a unit called Mid-West News with army agents in civilian clothes and they went around and interviewed all the antiwar protesters. 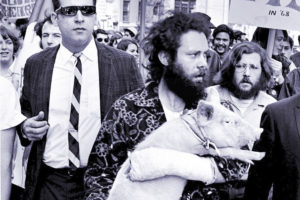 They shipped the film footage to Washington every night on an airliner so the generals could see movies of what was going on in Chicago when they got to work in the morning. That made them so happy. It was a complete waste of time. You could pick up the same thing on TV for far less, but they felt they needed their own film crew. The main thing they were going after was a pig named Pigasus, who was the Yippies’ candidate for president. They were really excited about Pigasus.”

A few hundred women were there on the boardwalk, holding a special ceremony. Icons of male oppression were being thrown into a trash barrel – cosmetics, a girdle, a copy of Playboy, high-heeled shoes, a pink brassiere – with the intent of setting the whole mix on fire. But there was an ordinance forbidding you to burn anything on the boardwalk, and the police were standing right there to enforce it. So there was no fire, but that didn’t matter. The image of a burning bra has become inextricably associated with women’s liberation. It’s a metaphorical truth. 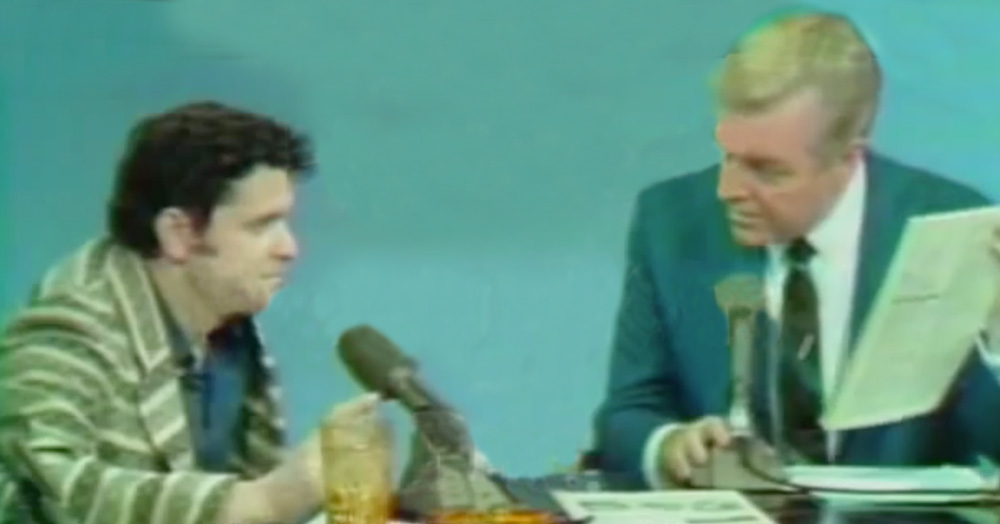 *I was a guest on the Joe Pyne show on KTTV in Los Angeles. He was a mean-spirited right-wing interviewer. His questions were vicious. “Well, Joe,” I said, “if you’re gonna ask questions like that, then let me ask you: Do you take off your wooden leg before you make love with your wife?” Pyne had lost his leg as a marine in World War II. Now his jaw literally dropped, the audience gasped, the producers averted their eyes and the atmosphere became surrealistic as Pyne went through the motions of continuing the interview.

On another occasion, he asked Frank Zappa, “Your hair is so long. Are you a girl?” Zappa replied, “You have a wooden leg. Are you a table?”

*Steve Post asked me to guest-host his radio night program in New York while he was away. At the time, a mass student strike was going on at Columbia University, so with a couple of talented friends, Marshall Efron and Bridget Potter, we pretended that we were Columbia students who had taken over WBAI. We used code names – Rudi Dutschke, Emma Goldman, and Danny the Red. In nasal tones, I explained that we were all taking a course in Alternative Media, that our assignment was either to write a term paper or participate in an activity, and that we had decided to take over a radio station for credit. “The airwaves belong to the people,” we chanted. We had planned to carry on this hoax for fifteen minutes, but it lasted four hours. KNBC in San Francisco and several other stations put us on the air, live. New York listeners called the police, but when they arrived we told them it was a put-on. Then, after they left, I went on the air again, snickering as I told the way we had fooled the cops. And they came again.

*An excerpt from President Lyndon Johnson’s remarks at the Annual Dinner of the White House Correspondents Association: “A very funny thing happened to me tonight when I was on my way out of the White House [laughter]–I mean tonight. 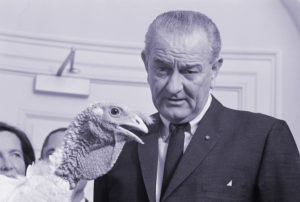 When I joined George Christian [his Special Assistant] to come over here, he said, ‘Mr. President, I think you forgot something.’ [LBJ indicated his White House identification pass.] So that is how I came to be wearing this. You may not like to wear your pass, but what do you think about me? I finally had to start using it after my announcement on March 31st [that he decided not to run in the next election]. One day, as I was walking over to my nap, a guard stopped me in the hall and looked at me very carefully and said, ‘Excuse me, buddy, but do you work here?’ So, Frank {Cormier of the Associated Press] and Carroll [Kilpatrick of the Washington Post], I am so glad you all remembered me tonight. You do remember me, don’t you, Hubert? [‘And how!’ replied Vice President Hubert Humphrey. But Tricky Dick Nixon defeated both Humphrey and Pigasus.]”

My World Turned Upside Down
Scroll to top