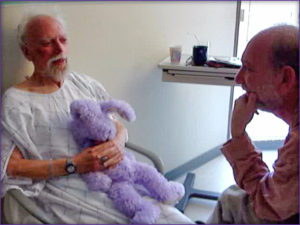 In 2005, Marlis and I visited Bob in the hospital. He had taken a fall due to his Post Polio Syndrome. He injured his face a bit, and was a little spacey from hospital medications, but he was fully there and in good spirits.

In thinking about what might cheer him up, pookas and whiskey came to mind, and so we combined the two. We brought him a purple pooka that we had hollowed out and filled with a bottle of his favorite liquid – Jameson Irish Whiskey. We “snuck” it into the hospital, and as ensues in the video, we determined that it was better the heavy little guy not stay with Bob in the hospital (he described his main nurse as similar to Nurse Ratched in One Flew Over the Cuckoo’s Nest), and instead Amanda babysat with the pooka until Bob returned home.

Bob liked to speculate on why he was in the hospital, why at times would he experience severe symptoms of Post Polio Syndrome, enough to cause a disabling fall. In the video he shares a few theories from one of his doctors, and improvises,

“I am not like the average Post Polio patient . . . they all agreed that it was Post Polio, basically. He thought it might be something else, basically. He changed his mind . . . he went through my bibliography (Bob laughs) and went through all the scientific tests too, of course. It’s post polio plus, either the weather, a flu . . . somebody put a black magic spell on me . . . They covered the whole repertoire I agree with them . . . Biochemical individuality, including things that happened after birth . . . Bonnello, he thinks I could of had a heart attack 10 years ago, but so small nobody noticed it, and it has complicated the whole development of the Post Polio Syndrome. When you start thinking about real causality in the real world, it gets much more complicated than it is in philosophical books, y’know, in theories.”

I told Christina the story of the purple pooka, and about our visit with Bob in the hospital. She loved the short video. She remembered well finding Bob after the fall, and getting him to the hospital. I asked her for the pooka buyer’s email address, and sent the dear Irish fan an email description of the scene along with a clip from the video above.

“I am not known for being emotionally demonstrative but I wiped away a few tears upon watching your clip. Complex to explain: in part the awe I felt at being given the clip, so intimate and *human*. In part because of the frailty of Robert, I wish I could have touched his hand. In part laughter at the whimsical absurdity of it all, set against the austere circumstances. Not least in part because of the friendships so evident. In part memories of my own grandfather. He was a publican in Belfast. In the late 80s he had a bad fall and spent a considerable time in hospital. He had a hospital gown just the same. This being Ireland, he was allowed a half pint of Guinness on the ward. I don’t think it was officially prescribed but he was allowed to drink it in full view of the ward staff. However, his favourite tipple was… you can guess, Jameson. The smuggling was not quite so creative it must be said, more of a discrete handover and swiftly into the hospital bedside cabinet. The clip has added so many more levels of significance.

“I have given up alcohol completely in the last years so it is amusing to think that any trauma this poor bunny may have endured, albeit in a very noble cause, will not be re-triggered by the sight of any bottles of spirits. We can convalesce together and (was it ever given a name? I don’t like to presume gender either) it will have an honoured home beside my pillow. It’s also rather quaint to think that he can be repaid in kindness in Ireland for the self-sacrificing kindness he gave to Robert with another form of Irish spirit. The story you gave me had real magic and I hope there is a nice circularity to the tale.

“I am sorry to offer mere cold words with poor, ragged grammar in exchange for something so utterly, utterly precious and perfect.”

An excerpt from Bob discussing Sister Kenny’s technique, and his first encounter with polio:

“The “faith healing” side of Sister Kenny’s technique involved at denial of the A.M.A. dogma that those crippled by polio could never walk again. The muscle massage had a lot in common with the techniques of the infamous Dr. Reich, Damned and Anathematized in the 1950s by the same medical bureaucracy that condemned Sister Kenny in the 1930s. The hot tub idea had been popular in the 19th Century, remained popular in Europe and has become popular again in California. I have no idea whether my cure resulted from one of these factors, from two, or from all three in synergy. Empirically, I recovered and started walking again. I walk normally today, with only an occasional limp when very tired, and some pedal myoclonism at night. Most people do not guess that I spent two years as a cripple.” – from Quantum Psychology

Anna Livia Get Your Gun: 23 Questions for California’s Next Governor

The story behind the Cosmic Trigger Audio Book
Scroll to top