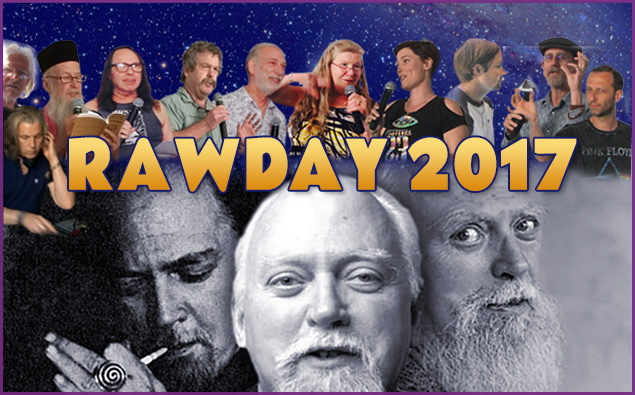 An enthusiastic gathering of RAW fans and friends Found the Others at the Museum of Art and History in Santa Cruz on July 23rd, 2017. I’m sure there were many meaningful encounters during the day, but the meeting of the “daughters” gave me a deep smile. Bob’s daughter Christina Pearson met Daisy Eris Campbell, writer/director of Cosmic Trigger The Play, and daughter of Ken Campbell, producer of Illuminatus! (the play). 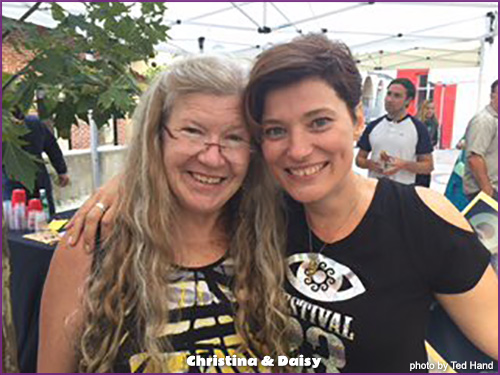 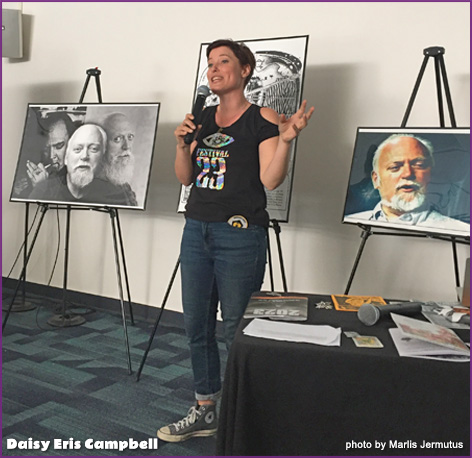 Daisy began the day with a spirited Discordian welcome. She then introduced Doctor Jabir, aka poet/physicist/QuantumTantrist Nick Herbert, who gleefully countered the theme of all of the other presenters by not talking about what he “got from Bob.” Instead, he told a tale of something Bob stole from him – sweet discord! 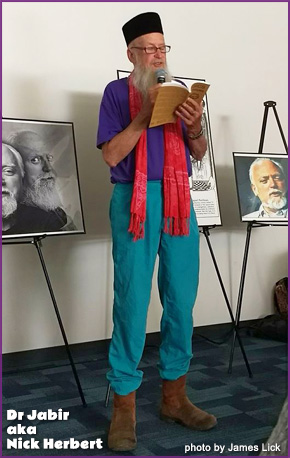 Riffing like a jazz musician, writer Erik Davis gave a thoughtful extemporaneous rap on Bob’s model agnosticism and the rise of a post-truth politics. 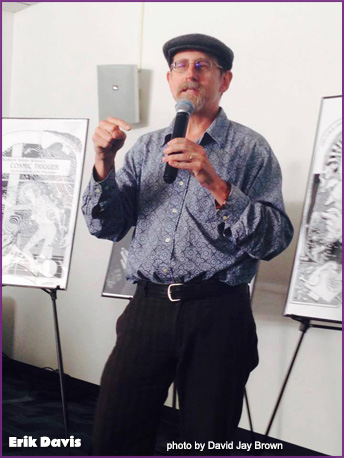 Christina shared some heartfelt memories of life in the family of RAW. 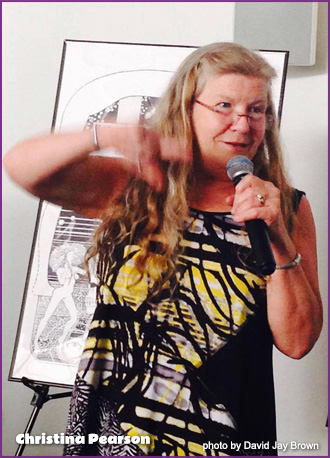 Daisy told the tale of her connections to the Illuminatus Trilogy and Cosmic Trigger in her entrancing theatrical style. 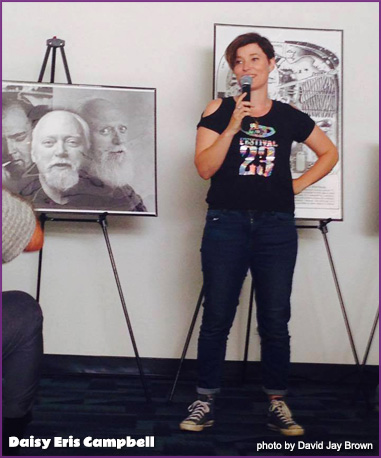 Discordian Historian Adam Gorightly caught us all up on current workings in the name of Eris. 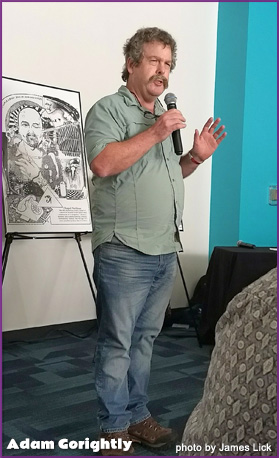 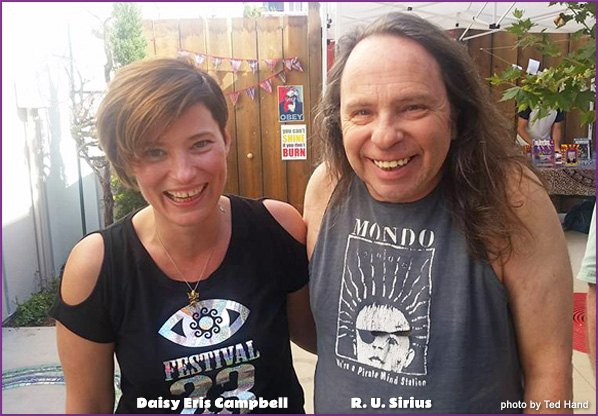 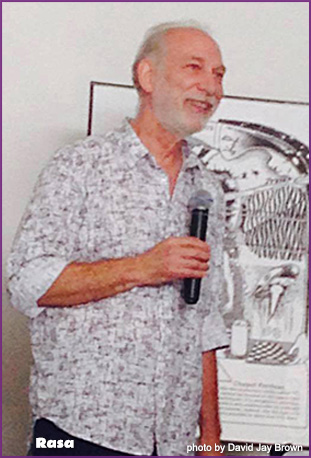 As Meta-Programming Director of the RAW Trust and Co-Publisher of Hilaritas Press, I offered some moments of thanks to the RAW community and to a number of critters in particular who have gone above and beyond to keep the lasagna flying . . .

Propaganda Anonymous (aka Gabriel Kennedy), has a new book Chapel Perilous: The Life and Thought Crimes of Robert Anton Wilson due out this year from TarcherPenguin.

Daisy Eris Campbell completed another successful run of Cosmic Trigger the Play, and through Daisy’s connections, Hilaritas Press published a new audio book of Cosmic Trigger featuring Oliver Senton, “Robert Anton Wilson” in Cosmic Trigger The Play. Many thanks for the audio book production also goes to Steve Fly Pratt who helped to organize the whole project and produce the recording along with the folks at Iron Man Records.

And as always, thanks to Fearless Scott McPherson of amoeba design for his art and design work for Cosmic Trigger the Play, and for designing our new Hilaritas Press book covers!

Thanks also to the writers of new material for our new RAW editions:

Mike Johnson – new Forward for Email to the Universe

Paul Krassner – new Afterword for Email to the Universe

I also gave a thanks to Toby Philpott (aka Alias Bogus), ostensibly for contributing his post to our blog last year on the history of the Maybe Logic Academy, but also for his general RAW-infused guerrilla ontological postings and activities. Before I could also mention a bit of Toby Philpott trivia, someone in the audience beat me to it by insisting that I note the fact that Toby is also renown for his role as the head and left arm of Jabba the Hut in Star Wars: Return of the Jedi.

And I relayed a bit of news from Hilaritas Press:

We are currently working on Coincidance, and the Historical Illuminatus Chronicles. Awestruck thanks goes to

Tom Jackson for helping with editing and proofreading. And a special additional thanks to Tom Jackson for his continually entertaining and informative blog: rawillumination.net.

And last but not at all least in any sense, enormous thanks to artist Bobby Campbell for numerous instances of sometimes crucial help he graciously offered over the last year to the RAW Trust and Hilaritas Press.

And Bob’s close friend Paul Krassner, now living in the desert in Southern California – we invited him, but although he appreciated the invitation, he was, sadly, unable to attend. He did however offer a message that I read to the gathering. Paul wrote,

“I’m there in spirit. Bob may be RAW, but he sure is WELL DONE.”

I also read a few snippets from old emails Bob wrote in the 90’s. His old quotes often feel relevant today. In one, Bob wrote:

In the dark, terrible months after my daughter’s death, I often repeated to myself a favorite quote from Nietzsche: “Whatever doesn’t kill me makes me stronger.” Then G Gordon Liddy got out of prison and I saw the TV coverage. Liddy walking to his car, reporters shouting questions, Liddy answering “No comment… no comment… no comment…” Then just before he got into the car, a reporter asked, “Do you have any comment on the american prison system?” Liddy replied, “Anything that doesn’t kill me makes me stronger.”

I suddenly felt a deep empathy with him. Guess that’s what the Romans meant by “humanitas” and Buddhists call compassion for all living beings.

Don’t know much about acting, but writing novels sure teaches a lot of that. I’ve learned more creating/becoming my monsters and villains than I’ve learned creating likeable characters.

Ferdinando, Magic Experience Designer, having cut the spine off of a copy of our latest paperback edition of Cosmic Trigger, distributed sections of the book to audience members, and then instructed them to randomly shuffle their pages. Ferdinando then collected the pages and asked for a volunteer from the audience. He gave the chaotically reassembled pages to the volunteer and asked him to pick one sentence on one page, and then mentally project the sentence into a crystal pyramid that Ferdinando was holding in his hand. Maybe because this was a RAW crowd, the volunteer, at first, mistakenly thought that he was supposed to pick a page, not look at it, but try to psychically “read” a line of text. In some moments of hilarious confusion Ferdinando convinced him that telepathy was not necessary. Reading it silently to himself before projecting it into the pyramid was good enough. Maybe that confusion was planned and the volunteer was a plant (skeptical me thought that, but the volunteer is probably reading this, so please let me know I’m probably wrong); in any case, in the end, with the pages thoroughly shuffled and one page randomly selected, Ferdinando recited the exact line that the volunteer had chosen! The line was one of Leary’s Commandments for the Molecular Age, “Thou shalt not alter the consciousness of thy neighbor without his or her consent.” 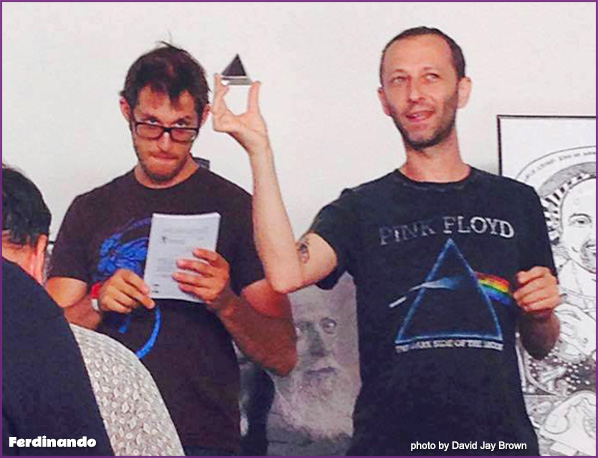 The original artist for Cosmic Trigger, John Thompson was handing out signed copies of his illustrations throughout the day, and expounding on one of his many area’s of expertise, from mythologies and conspiracies to the intelligence of the stars. Artist Bobby Campbell (illustrator for the Historical Illuminatus Chronicles and other RAW-related publications) was giving away copies of his beautifully crafted new RAW comic book. RAW Archivist Andrew J. O’Keefe videotaped the event. U.K. DJ Greg Wilson provided a seamless soundscape during interludes in the program and ended the night with a two hour set of his “Super Weird Substance.” Several people reported finding quarters at the venue. 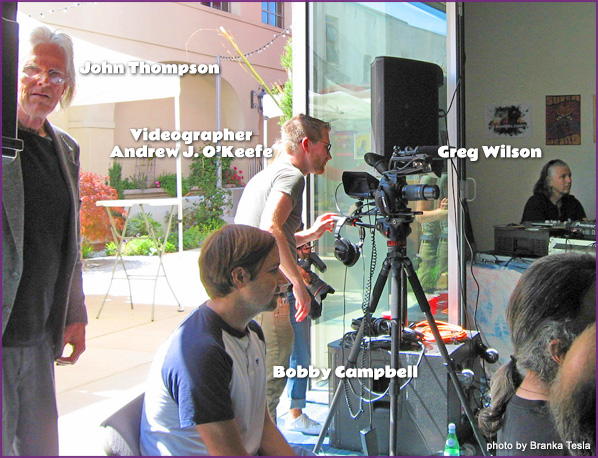 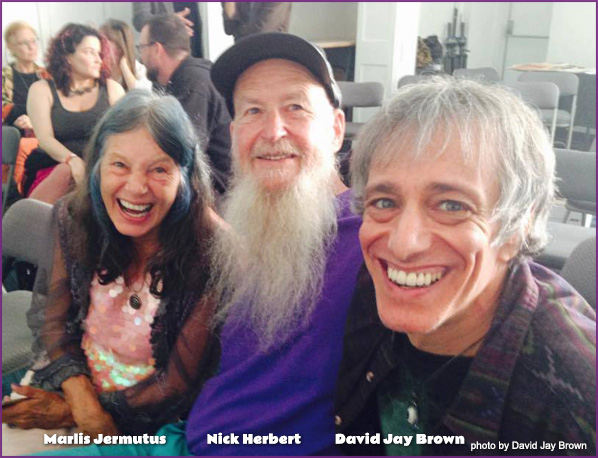 A note about the next day . . .
My dear friend Marlis Jermutus (who introduced me to RAW many years ago) joined Daisy, her husband Greg and me for a visit to Oberon Zell’s Academy of Arcana in Santa Cruz on July 24th. I had my iPhone out and captured Daisy in a wonderful minute and a half of her reciting Macbeth in New Guinea Pidgin English. Sorta a RAW DAY Extra, and well worth a watch!

A colossal Thank You goes to Dustin O’Reilly, Jeff Walsh, Marisa Marlowe and Michelle Olley for all the crucial behind-the-scenes organizing and heavy lifting that made the event run seamlessly. Dozens of planning emails and days of preparation began when DJ Greg Wilson, in planning a California tour, contacted event organizer Dustin O’Reilly to find a venue for RAW DAY. From there, the lasagna kept flying higher and higher.

The story behind the Cosmic Trigger Audio Book