“So much to do, so little time!” said the White Rabbit…

And that is exactly how I feel. I just celebrated my 60th birthday a week ago, and am feeling wide open to the experience of living into my 7th decade of life as a human being! 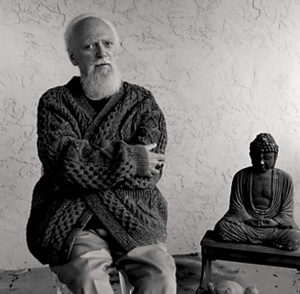 As I have aged, my sense of “time” morphs more and more often. Sometimes, each moment unfolds with my awareness riding what I like to call “the Crest of Creation” (think wave here… as opposed to particle…), while other moments seem endlessly filled with what I call brain fluff. You know, all the random and not so random bits of verbiage / judgment / perspective / acknowledgment winding like a river in the background of my awareness….

Goodness, does anyone comprehend my just written paragraph? Like, mainly me? Not that it matters, which makes the whole thing rather fun to play with.

Matters of the heart; One of my personal loose ends is sorting through my remaining boxes of my parent’s possessions. A couple of the possessions I have integrated into my daily life, an object sitting on a shelf, or a shirt hanging in my closet, a book in the bookcase.  But the truth is everything else stays all boxed up, and relatively useless unless you feel like developing muscles lugging boxes around. I don’t, and it is time to make these items available to others who may enjoy them.

To do this, I am setting up an E-Bay auction, to list a number of RAW collectibles, along with “just random” stuff that belonged to Bob and Arlen, my parents.

Before you make assumptions about whatever will be listed, and why I would do this let me explain! In late 2007, I also sold some memorabilia, as I needed desperately to raise money to take care of Bob’s past debts, family needs, and to take some financial weight off me as I attempted to help my brother. I was so grateful for folk’s interest and support, and was deeply touched and amazed at some of the notes I received!

Fast forward to today; I have several boxes, not a lot, as Bob and Arlen really never owned much. And, most of what they did own was often second-hand, well-used, etc! But… I have a sense that some folks would really enjoy having an object infused with RAW’s history and life; whether every-day stuff, or not! And, again, the income (whatever is received) will help to pay bills, and move Hilaritas Press forward!

For instance; I have Bob’s lovely Aran Fisherman’s sweater made by John Molloy of Donegal, Ireland that he bought in Ireland for warmth (photo above). It is too big for me, my husband doesn’t wear sweaters, and someone might just think it would be awesomely cool to write their own masterpiece while wrapped in a sweater of RAW’s! 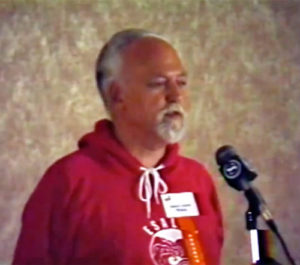 Similarly, I will be listing the sweatshirt he made famous by wearing it during a couple presentations – it’s hot pink! (kind of…) but has several years of wear left in it, or it could be framed as wall art or made into a comfy pillow for your couch or bed… just THINK what you could do with his 30-some year old Esalen sweatshirt!

Let’s see, what else? I have the spontaneous wall collage he had us tape up on the livingroom wall during the last year of his life so he could muse on the images; sometimes he would request a change in position, or an addition or deletion. It was SO interesting! Might make an interesting topic of discussion! It is just held together by tape currently, but it could be custom-framed (it is an odd shape) and could be a great addition to someone’s art collection. 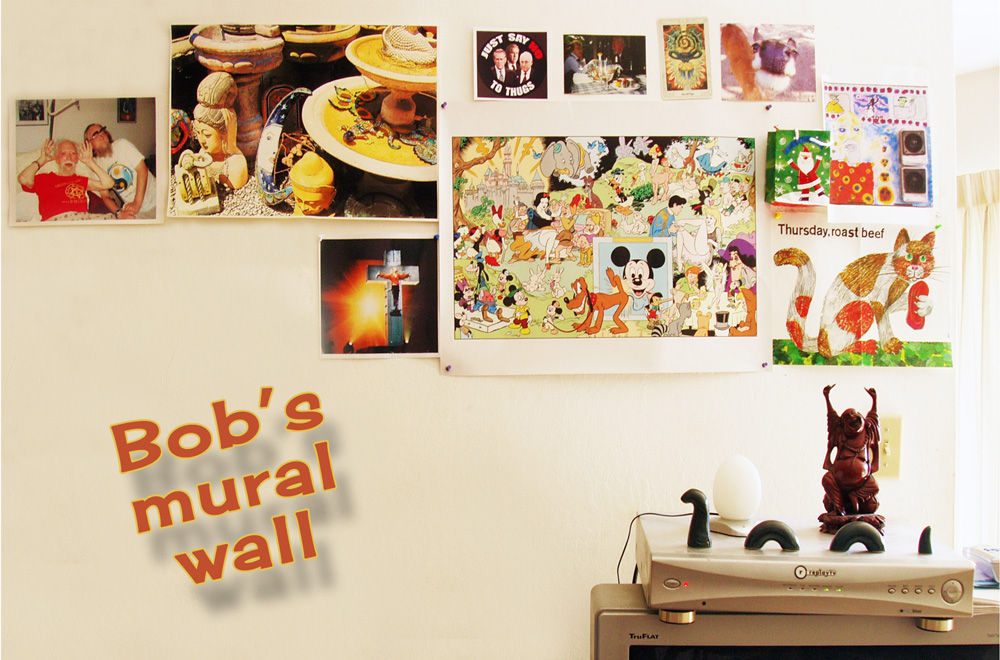 See the little Hotei statuette? This little figurine pranced about the house for years, as Bob would get an itch to relocate items according to his whimsy…

Here is a better image of RAWs Hotei that I have dressed up a bit! 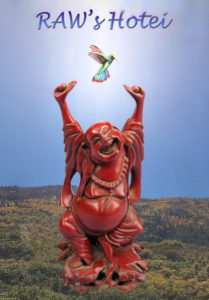 I also will be listing a few items like his Jain Hand of God small copper wall hanging that my parents had for decades,along with some of his personal library books; many have been given away, but some still around are interesting as RAW would often take a book on a plane to read, then leave some random artifact as a page-marker in the book.

Like a postcard, or an airline boarding pass, etc. There are a few books that are inscribed to him, but most are not.

Each book has a 3×4 bookplate in it that I created, with my handwritten signature as Trustee for the Robert Anton Wilson Trust, validating that it came from Bob’s personal home library.

For other items that are not books, each will be accompanied by a small card, also signed by me, validating the item came from his home, and any facts I may have about it.

For me, I have gone through months of “wanting to keep” and “wanting NOT to keep” all this stuff. I have been approached by some to see if I wanted to donate his archives to a university or other institution, but I think I would rather spread the vibe to those who loved him, & enjoyed or were touched in some way by his body of work! Plus, these are not manuscripts, these are his items that were in use in everyday life. Why not bring them into your life?

Once ready, you can access the RAW memorabilia e-bay auction from links on this website and elsewhere.

All my love, Christina

Ironic Revenge Attack against the RAW legacy!
Scroll to top